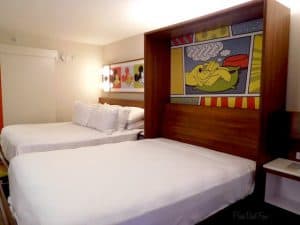 Disney’s Pop Century Resort is within the value category of resorts at Walt Disney World and a popular choice for many fans.  I had the opportunity to stay in both an ‘older’ room as well as a refurbished one and as you would expect, the renovated room was a whole different feel. Our original room felt very similar to our stay at All Star Movies.  It was a basic room, some cute decor, but looking very ‘worn’.  It was clean, it was functional, but nothing special aside from the Disney touches. When we moved to the refurbished room at Pop Century after a night in the ‘older’ rooms, I was beyond pleasantly surprised!  Since this is a value resort, I was expecting it to be clean, functional and basic with a little touch of Disney.  As we opened the door, I was shocked. Here are 8 reasons I loved the refurbished room at Disney’s Pop Century Resort:

I have seen many complaints online about it resembling a ‘hospital room’ with the white walls and white furniture, but I loved it.   When I’m at home the first thing I do is turn on all of the lights, I can’t handle being in a dimly lit room, so this room was perfect for me!

Since the one bed folds back up, there was plenty of space in the centre of the room.  There was only 2 of us, but we didn’t feel like we were in each other’s way like we did in the original rooms.

When the bed is “up” there is plenty of room.

I have to admit, we both slept GREAT at the resort!  Tons of pillows (we had 8 pillows between 2 of us!) and the mattress was very comfortable.  I slept on the bed that pulled down from the wall and my sister slept in the permanent one.  They are both listed as Queen Size, but it did feel like mine was a little tiny bit smaller – I wish I had brought a measuring tape!  Even though it ‘appeared’ a little smaller, it still felt bigger than a double bed.

I don’t worry about things going missing much at Walt Disney World, but it can happen.  It’s always a good idea to lock up your valuables when you’re not there.  I locked up my laptop, Ipad, Passport and extra cameras with plenty of space left over.  I was impressed with the depth and width of the safe and could have fit a bunch of more things in there.  The safe was easy to operate allowing you to set your own PIN code to open it.

Some of the resorts have the older fridges, but these new ones with the glass doors really keep your drinks cold.  I drink a LOT of water, and it’s important to me that it’s ice cold – especially on a hot day.  These fridges do not disappoint!  In fact, on day 2 I had to turn it down a bit since my water bottles were freezing a little. 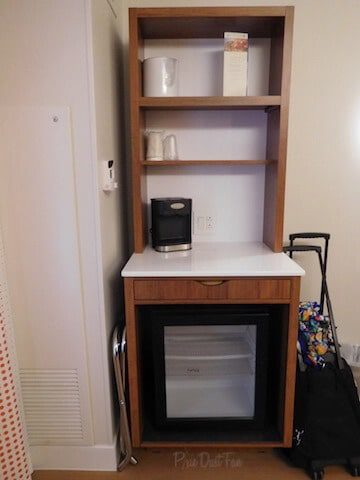 Big vanity area, ironing board and iron, big mirror, storage space and a place to hang up your clothes made this a great use of the space.  We had lots of room for all of our toiletries as well as storing some of the shopping we did in the little cubbies, keeping it out of the way and making the room feel less cluttered.  Yes – we can do some serious damage when we’re shopping!

I’m not a fan of shower curtains, especially at a hotel.  I don’t know why, but they always make me feel like it’s so dark and confined.  In these new rooms the shower had sliding glass doors and there was plenty of light!  The water pressure was great and there was the option of the hand held vs rain shower. 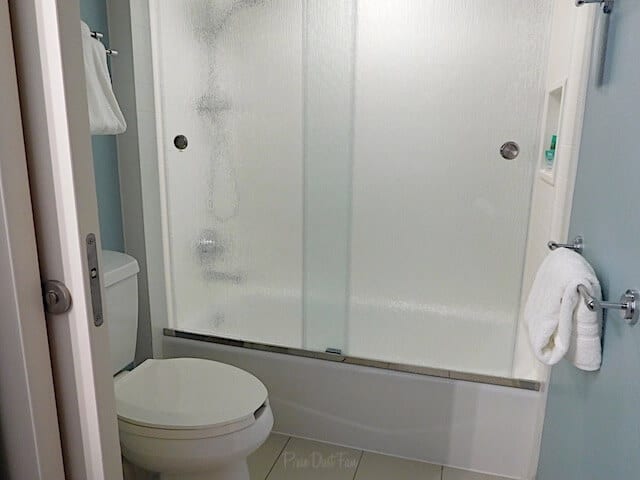 This room had so many outlets and USB stations that we didn’t use them all.  It’s always a challenge with us to charge our devices.  With 2 phones, 2 iPads, 2 iWatches, laptops, Fuel Rods and cameras, we struggle at the end of the day to get them all plugged in.  In this room, we were able to plug in 8 devices at a time on the unit under the TV – that was very handy for us! 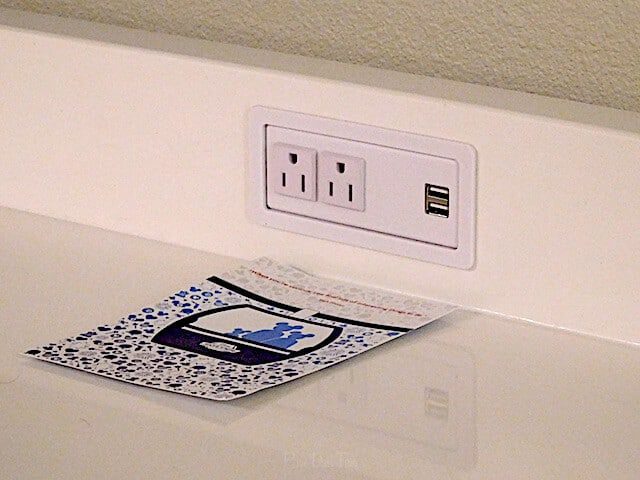 While there are many factors that should go in to choosing a resort, the room is an important one.  Pop Century Resort’s refurbished rooms are clean, spacious and fun – with touches of Disney sprinkled throughout.  I would definitely stay in a refurbished room again. Check out my tour of the room on YouTube: