Luke Skywalker’s landspeeder was revealed at Comic-Con in San Diego in early 2017.  This kid-sized vehicle has realistic details that has Star Wars fans excited.

Designed for children ages 4 and up, the landspeeder seats 2 pint-sized passengers weighing up to 130 pounds.  The exterior has all of the trimmings you would expect to find on an landspeeder, including distressed paint and a big dent on the nose, just like Luke’s.

Although it has a very close resemblance to the X-34 landspeeder from Star Wars: A New Hope, it rides on wheels.  There is no hovering, but it’s still the coolest thing in this galaxy.

Inside of the vehicle is an interactive dashboard with lights and sounds from the movie.  Among the sounds you can hear the engine, R2-D2 or dialog from Luke Skywalker himself.

“Look it, theres a Droid on the scanner.  Dead ahead.  Might be our little Artoo unit.  Hit the accelerator!” – Luke Skywalker

The gear shift allows for speeds of 2 or 5 mph in the forward position or 2 mph in reverse.  Running on a rechargeable 12V battery, it’s much smaller than the original would have been, weighing just 59.9 pounds. 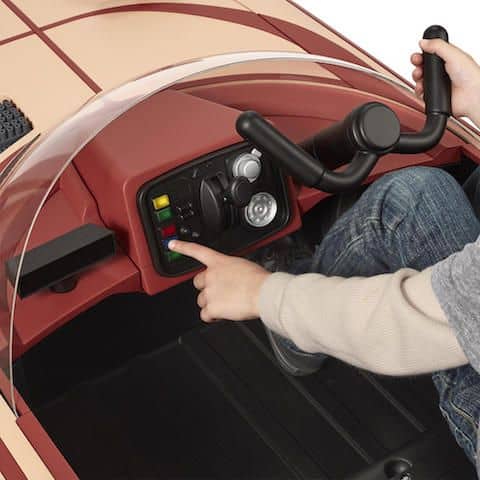 Built by Radio Flyer, the landspeeder was originally only available at Toys R Us. It’s a little more expensive than a kid-sized Ferrari, but has all of the features an aspiring Jedi would want to have.  When you are battling Darth Vader, you need more than a lightsaber and the force, you need the right vehicle.

When Star Wars first hit the movie screens in 1977, we all aspired to be Luke, Han or Leia.  We reenacted movie scenes in the playground and used our little red wagons and Big Wheels to simulate landspeeders and the Millennium Falcon.  I suspect many of us who had this playtime ritual are now trying to figure out how to ‘fit’ in the new landspeeder and take it for a spin.  Maybe I could drive it to work one day, imagine how jealous my friends would be?