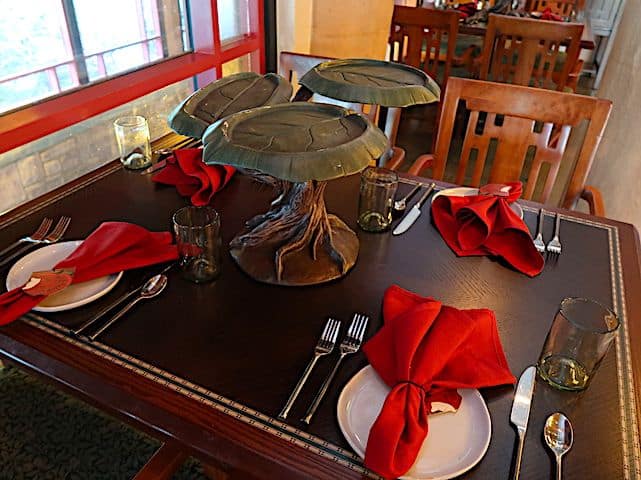 Character dining is always a fun thing when you visit Walt Disney World, and Storybook dining with Snow White might be just what you’re looking for!

Located at Disney’s Wilderness Lodge resort, this dinner has the theming nailed.  Artist Point has been transformed in to the Enchanted Forest with many details from the ceiling to the table that immerse you in the experience. 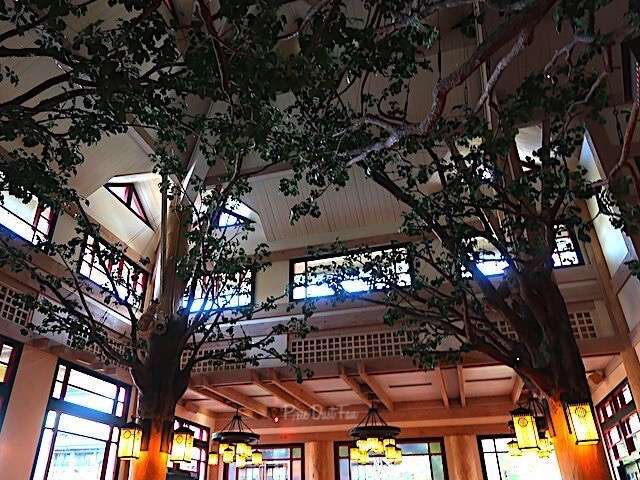 It really is a forest!

Snow White, Dopey and Grumpy all make stops at your table for pictures.  Throughout the meal there are a couple of intervals for songs and a little dance, and then the Evil Queen appears.  She will not come to your table and waits at the photo op in the middle of the restaurant.  Your server will tell you that she does NOT like to be approached and you must wait to be invited, which happens to be when you’ve paid the bill they will ‘invite’ you to see her before you go. 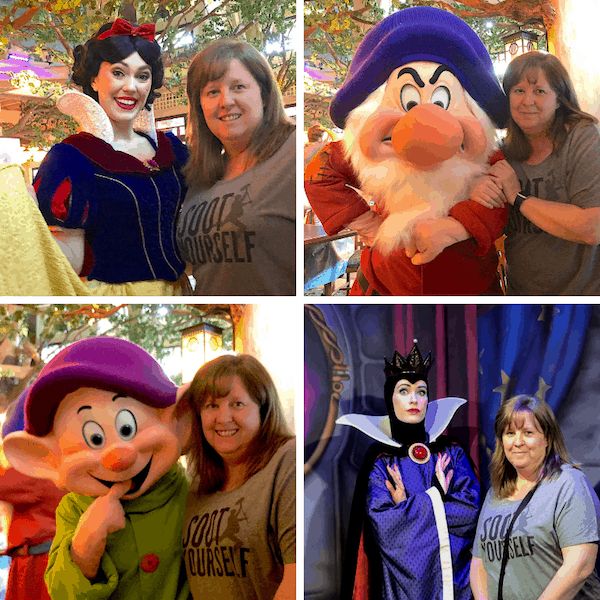 I was excited to meet each one of them, well – except the Queen! She was a bit scary!

Now, on to the food…

The prix-fixe (fixed price) menu dinner offers a choice of individual plated entrées and shared starters and desserts, all themed perfectly for the occasion!

The serving tray in the centre of the table looks like a tree with three branches – this is where your starters and desserts will be placed. 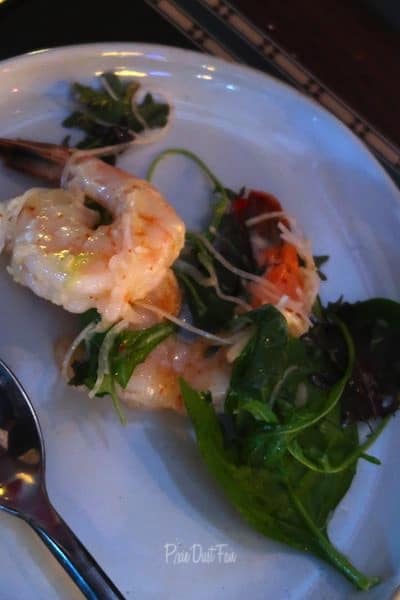 I’m not a fan of shrimp, so I skipped that.  My table mates said it was great.

The Winter Squash Bisque was unexpected.  If you follow my blog, you’ll know I’m a fairly picky eater and tend to avoid things that don’t ‘sound’ good to me – squash does not sound good and I’ve never tried it.  In the spirit of stepping outside of my comfort zone – I tried it.  WOW – I would have eaten an entire bowl if given the choice, I was sad it was just a small sampling in a black cauldron (which was super cute!).  There was a lollipop that came with it of marshmallow?  Yes, it was delicious! 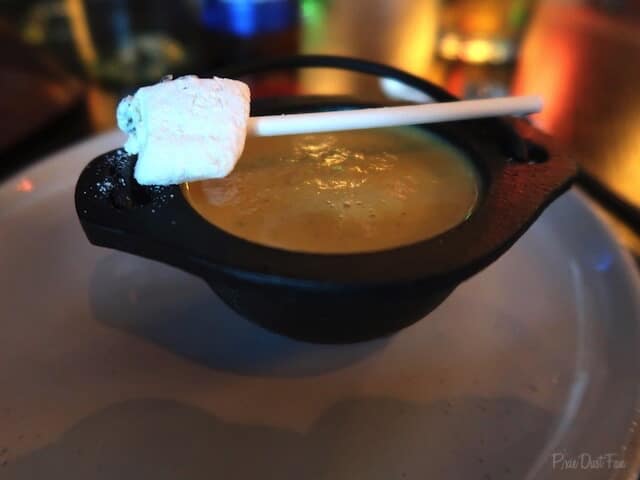 The Hunter’s Pie was chicken and had a kind of fruit sauce to go with them, it was good (not as good as the squash!), but it was tasty. 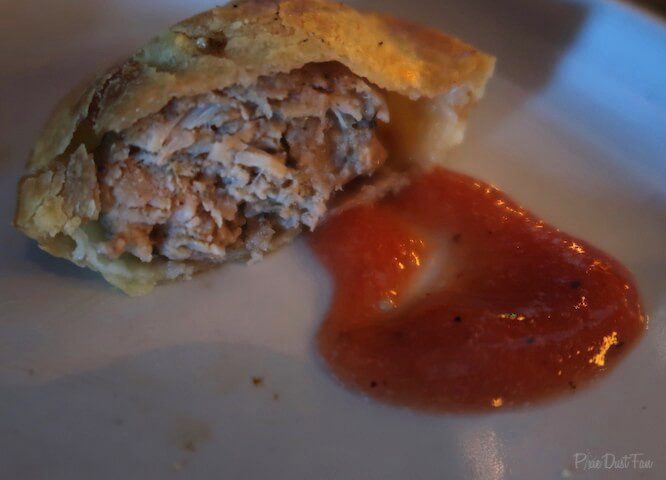 I had the opportunity to dine here twice and tried both the Royal Prime Rib Roast as well as the Brother’s Grimm Roasted Chicken for my entrees.

The Brother’s Grimm Roasted Chicken was different.  It came with confit potatoes, roasted brussle sprouts, apples and chestnut butter.  I will admit, the apple / chicken combo had me questioning my choice, but it was ok.  I didn’t hate it, but I wouldn’t run back to get it again. 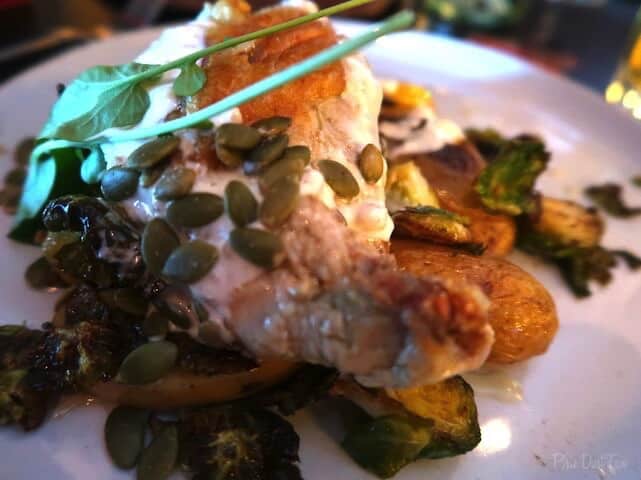 The Royal Prime Rib Roast was a very large serving with horseradish mashed potato, carrots and a popover (that’s like a Yorkshire pudding to me!). While I liked the dish, I don’t particularly like horseradish and had hoped it was just a hint in the potatoes, but it was actually a fairly strong taste. 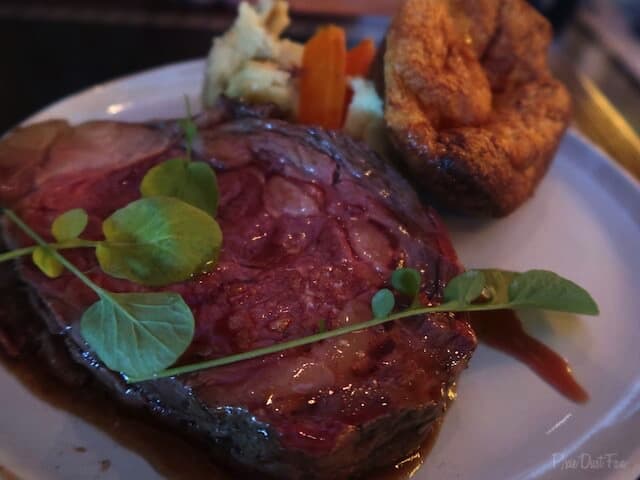 The desserts were quite a treat and of course the theming continued.  The “Poison” apple, Fairy Tale Gooseberry Pie and the Miner’s Treasure all arrived at the table, one of each for us.

Again, picky eater here – I had to google “What is Gooseberry Pie”.  I took a small piece, didn’t like it – didn’t eat it.  If you like Gooseberry Pie (or even know what it is) – you might like it! 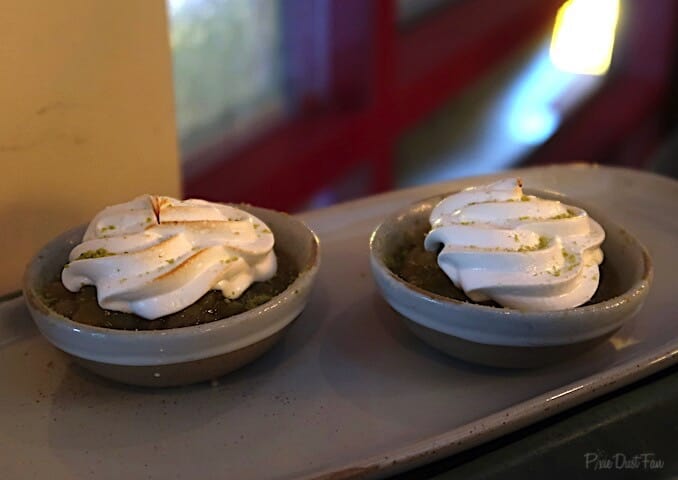 Fairy Tale Gooseberry Pie, I did google it

The “Poison” Apple was a white chocolate-apple mousse – it was good, and sweet – all things sugary though are good to me! 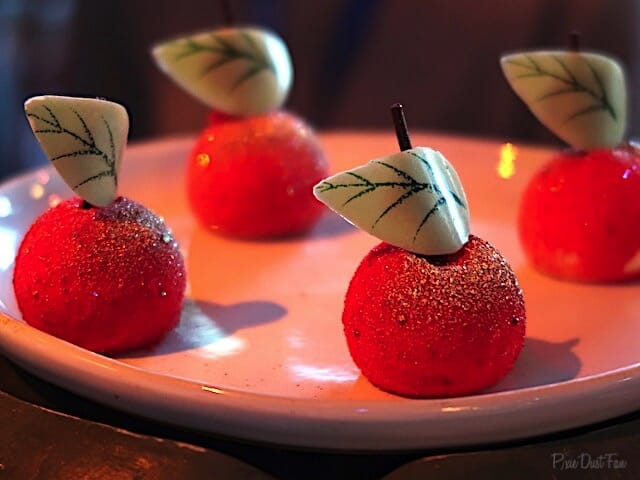 Anyone care for a poison apple?

My favourite was the Miner’s Treasures although others would say the buttercream icing was too sweet… I didn’t think so.  It was like a cupcake in a glass, how can that be wrong?  There were some chocolate gems in there too! 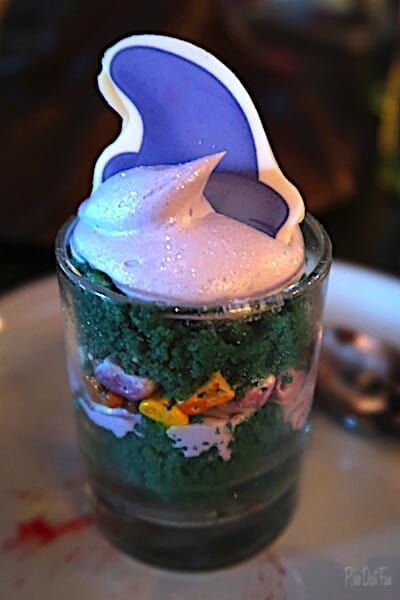 The final dessert arrived after the other three – the Hunter’s Gift to the Queen.  This was delicious, but THIS is the height of theming.  The video below shows you the full effects of the presentation when they bring this to the table. 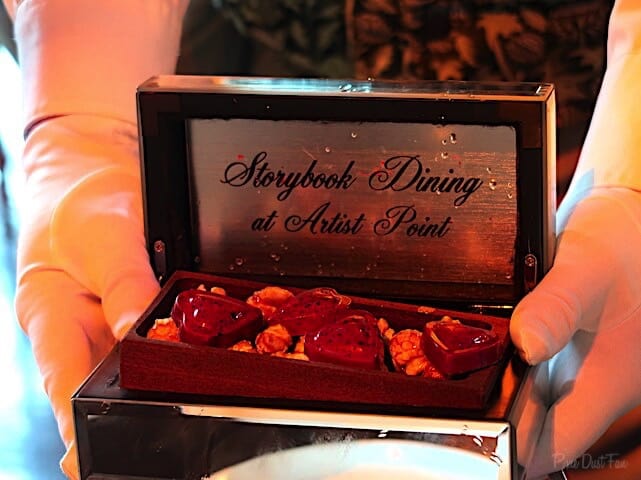 The Hunter’s Gift to the Queen. Watch the video to see how it arrives!

Have you experienced this yet?  Are you going to add this to your list for your next Walt Disney World vacation?

I ate there in January and our server didn’t say anything about the Evil Queen, we just stood in line to get to meet her and have their picture taken when she made her entrance. I got the chicken dish and it was just blah. The apps and dessert were good.

I totally agree about the apps and desserts!

As a Disney lover we go once a year, always get the dining plan. After burning two meals for Be our Guest which was a huge disappointment ( with the exception of the atmosphere and decorations) we spent our last night at Snow White. It was the second night it opened! My granddaughter , who is four had the children’s prime rib, as did my boyfriend and I. It was delicious. The atmosphere was beautiful, Snow White, dopey and grumpy were awesome with my grand daughter and that queen!! Wow! She never broke character, my grand daughter was dressed up… Read more »

that sounds like it was such a wonderful experience for you all!

And here is a good tip, to avoid the buses, changing buses etc. We took the Minnie van, 26$ , very worth It!

I’m a fan of the Minnie Vans – they are fantastic!
https://www.pixiedustfan.com/5-reasons-to-use-minnie-vans-disney/