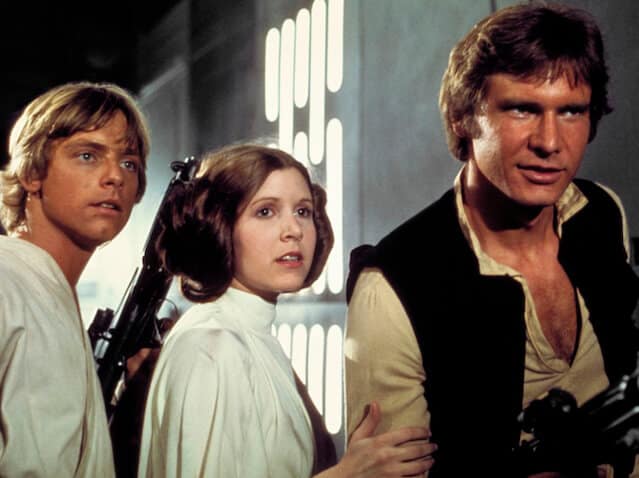 If you were born in the 70s, just reading that list would make you smile.  I have special memories attached to each one.

Each memory brings such emotion, and this is why I cried on April 30th when I stepped behind the wall and saw Star Wars: Galaxy’s Edge.

I was invited to a social media event that had us touring resorts, tasting menus and attending presentations about all of the amazing things coming to Walt Disney World this year.  It was an incredible adventure, full of surprises and activities that I am so grateful that I was a part of. 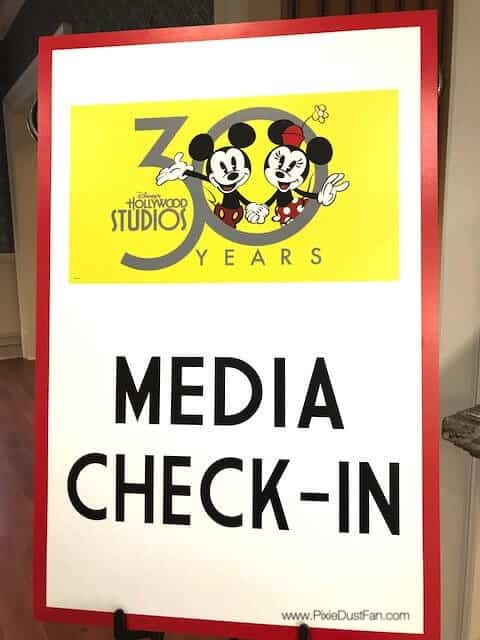 One of the days on our itinerary said we were going to Hollywood Studios for “Guest speakers on Star Wars: Galaxy’s Edge and a look into the future of Hollywood Studios”.  I was so excited to read that we were going to be talking about Star Wars, but I almost FAINTED when I read that we needed to be wearing pants and closed toe hard sole shoes.  WHAT??  That can’t be.  Are we going to a construction site??  In my head I’m thinking to myself “don’t get excited, it’s not going to be that, it can’t POSSIBLY be that, you are NOT going to see Star Wars: Galaxy’s Edge”.

And then they tell us, we’re GOING IN to Star Wars: Galaxy’s Edge.  I almost hyperventilated. 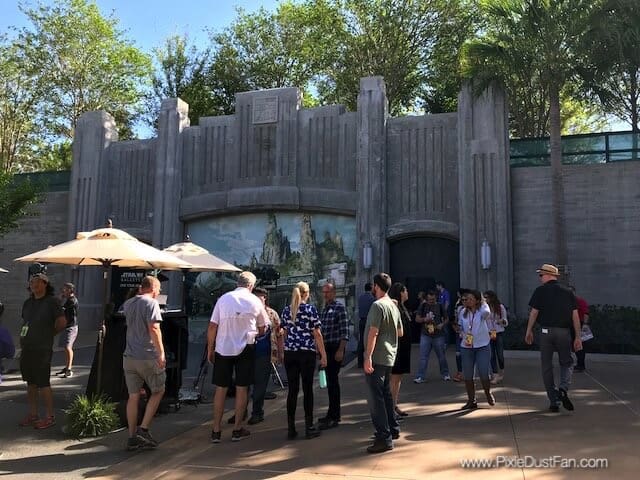 We walked through the door on the right. Lots of activity going on before we went through!

We were divided in to small groups of 5 to go inside.  We had our Disney guide (who had been with us for the social media event) and then we had 2 people from Imagineering who could tell us about the land and answer questions .  We were given safety glasses and reminded that there could be no photos.  My safety glasses are now a treasured souvenir! 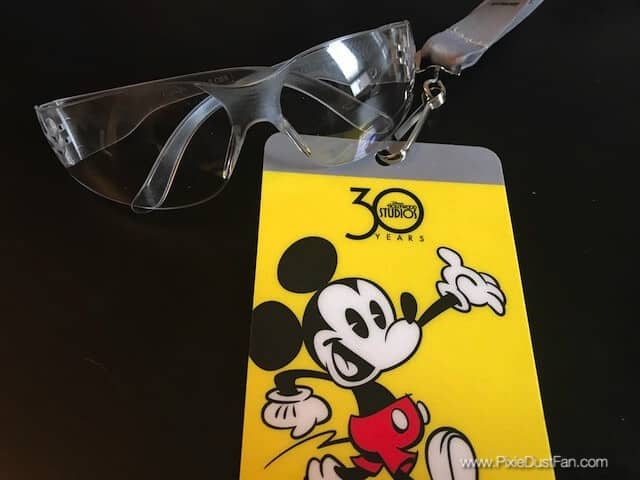 I will hold on to these safety glasses as a souvenir of a wonderful day!

As we entered through the door, we could see a HUGE model of Galaxy’s Edge on a table.  The model is used for the purposes of painting and carving the rock work in the land.  The model itself was about 3 years old and some of buildings that were on it had not made it to the final phase.

We got ‘oriented’ by looking at the model to see where we were in the land.  We were in the shadows and the sunlight was streaming in under the archway that we were about to walk through.  As we walked down the path and stood in the sun, I was overwhelmed.

While I have no pictures to share, I can tell you that this land is like nothing I had imagined.  We have all seen the artist drawings, the concept art and every little nugget and fly over by a drone that’s been leaked.  What you can’t get from all of those things is the SIZE of this land, everything was bigger than I expected.  From where we stood, we could only see a fraction of the 14 acre land, and it was incredible. 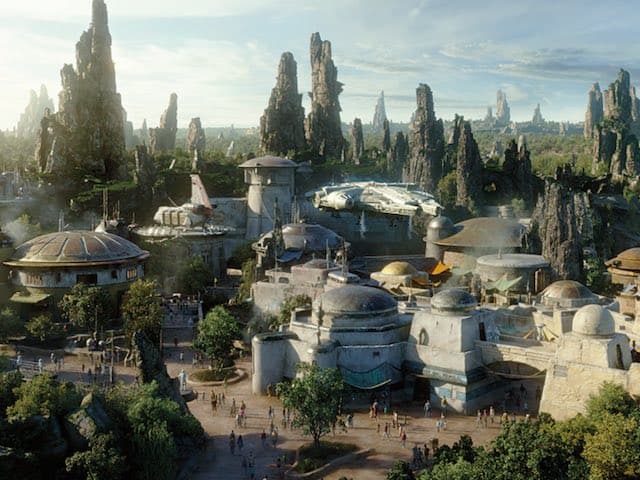 Of course there are all of the Disney details in Galaxy’s Edge including footprints from some kind of creature on Batuu.  The storytelling is on point with only one spire being black that serves as sort of the organizing place on Batuu.  If you need fuel or to make a trade, you go to the Black Spire Outpost.   The dome and the walls of the cantina will be scarred by the pilots who failed to put the Falcon down properly.  I stood in awe listening to all of the details they shared, including that we have Rex from the old Star Tours as a DJ in the cantina!

As we turned to leave, I was holding back the emotion that was taking over.  The lovely girl that was with us whispered in my ear “it’s okay to cry, many have cried when they see it”.  So, I did.  I had to share my thoughts with everyone right away – so I put on my sunglasses and went live on Facebook.  I don’t even think I made sense, I just had to tell everyone!

For every one of us who wanted to be a Jedi, Galaxy’s Edge is everything we dreamed of and more.  While we may pushing 50 – we are all going to be kids again when we visit Star Wars: Galaxy’s Edge.

Can you imagine taking your friends to Galaxy’s Edge?  Bob Iger took some special guests, oh to be a fly on those walls!

Star Wars: Galaxy’s Edge opens in Disneyland on May 31st and Walt Disney World on August 29th with the Millennium Falcon:  Smugglers Run attraction.  The Rise of the Resistance attraction will open later in the year.

Are you excited about Star Wars Galaxy’s Edge?   Do YOU have a trip booked to go?  If you don’t – contact my friends at Pure Magic Vacations for a quote!  May the force be with you!