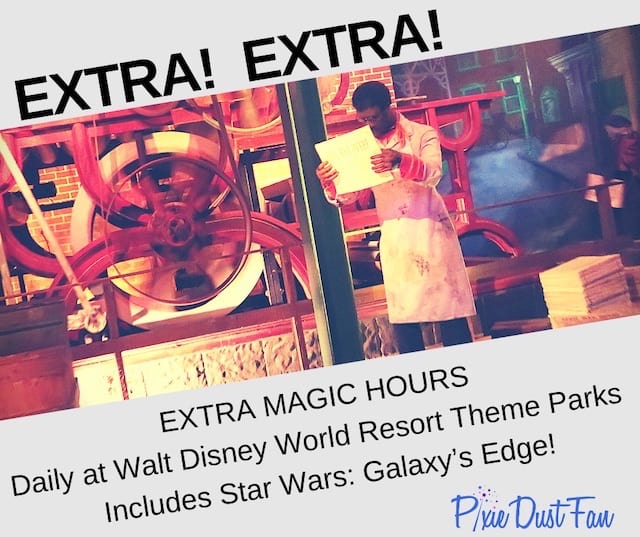 This fall, guests of Disney Resort hotels and other select hotels will have more opportunities to take advantage of the Extra Magic Hours with a new limited time EXTRA EXTRA Magic Hours!

This new benefit WILL include Star Wars: Galaxy’s Edge at Disney’s Hollywood Studios.  I will include other experiences at Disney’s Animal Kingdom and Magic Kingdom – but really, the big ticket is Star Wars.

September 1 – November 2nd the park will have these new Extra, Extra Magic hours between 6am and 9am for Star Wars: Galaxy’s Edge as well as Toy Story Land attractions.

Star Wars: Galaxy’s Edge officially opens on August 29th.  From August 29-31st the park will be open at 6am for EVERYONE – not just resort guests.  You can expect long lines and the park reaching capacity early in the day.

Magic Kingdom – Extra, Extra Magic Hours are scheduled every day between Aug. 29th to Nov. 2nd between 7 and 8 am.

The Extra, Extra Magic Hours benefit is open to those guests staying at a Walt Disney World Resort who also have a valid theme park ticket.

It’s important to note that not all Walt Disney World attractions are available with the Extra Magic Hours benefit.  Disney is working to curb some of the influx of guests that will arrive with the opening of Star Wars: Galaxy’s Edge and I think this is the first step in doing so.

Are you visiting Walt Disney World for the opening of Star Wars: Galaxy’s Edge?

How excited are you?