Guardians of the Galaxy: Cosmic Rewind – will you get sick?

I have been on every attraction at Walt Disney World.  Yep – I even got on Astro Orbiter (although I’m pretty sure I couldn’t do it again!).  I pride myself on being able to say I’ve done them all at least once.  But in fairness, when Mission Space came out in 2003 I was still pretty young and there was no green side.  While I struggled with Mission Space back then, there is NO WAY I could handle the orange side now.

So here I am, starting to wonder:

Am I getting too old for the new Disney attractions? 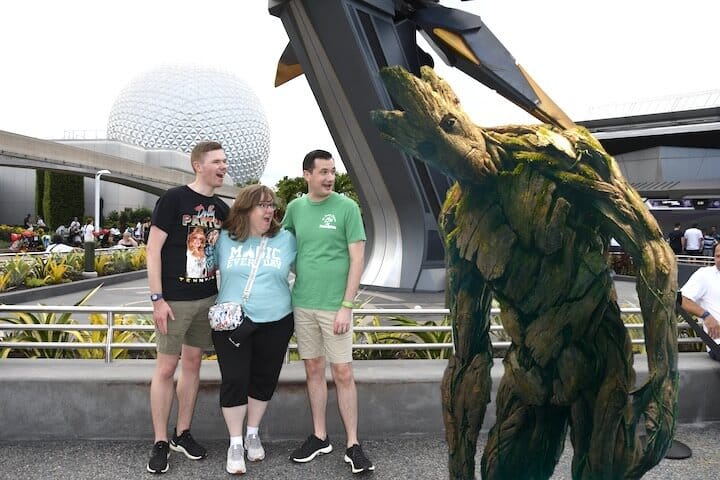 I feel like when a new attraction is announced I start to worry that THIS will be the one I just can’t do.  I started to think that about Guardians of the Galaxy: Cosmic Rewind at Epcot before it even opened.

I don’t watch spoilers (although in hindsight I should have!) but I did ask my friends how they felt about the ride.  These were my two big issues – no spoilers and advice from my friends.

I had friends that said it was great, it was fast but smooth and that I would love it.

Then I had one friend tell me her husband felt pretty sick afterwards.

That was all I needed to hear – I heard a bunch of great reviews saying it was fast and smooth and then I heard one that wasn’t.  Guess which one I focused on?

Will I get sick on the Guardians of the Galaxy: Cosmic Rewind at Epcot?

My friends Curtis and Alek are local and had experienced it multiple times, they wanted to be with me for my first ride.  My podcast co-host Carrie and I had planned to ride it together a couple of days later. 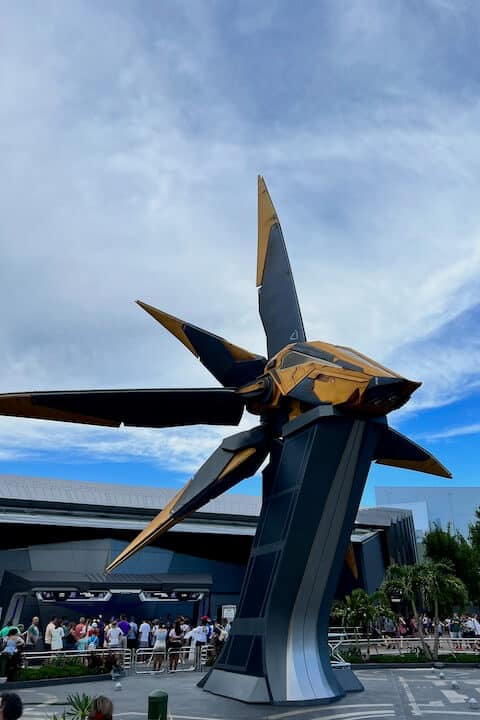 I spent the day working in my hotel and Curtis and Alek picked me up at dinner time.  I had spent the whole day thinking I didn’t want to get sick so I decided not to eat lunch (why tempt it?).  I  also took some Gravol (the Canadian equivalent of Dramamine) and I was ready to go.  But to be truthful – I was really worked up.

We got in the line and I was focused on remaining calm.  The line was fun and the pre-show was entertaining.  Curtis and Alek did their best to keep me distracted and just kept telling me I would be ok.

We got to the cars, moment of truth… and we are in the LAST ROW!  At least I can focus on the back of Alek’s head this way right?

Now remember I said earlier that I wish I had seen some spoilers?  I’m about to give one now… so if you don’t want any spoilers – don’t read anymore.

If you’re still reading then you’re ok with spoilers. 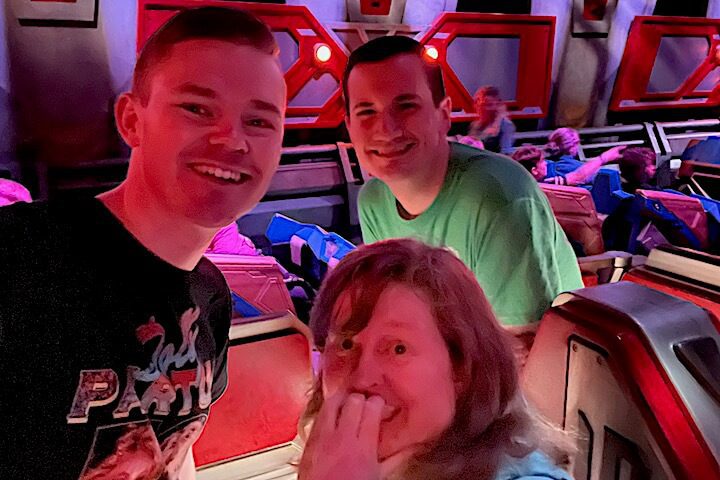 I’m nervous – we are about to get on!

We are in the car and they start to move to get ready for launch.  We go through a fun little bit that’s slow moving while we get some info from Star Lord and others.  At this point I’m feeling pretty good….But wait.. we have turned and we are reversed!  I turned to Curtis and said “please tell me they don’t launch us backwards?” and no sooner did I get the words out of my mouth and we were GONE – backwards of course! 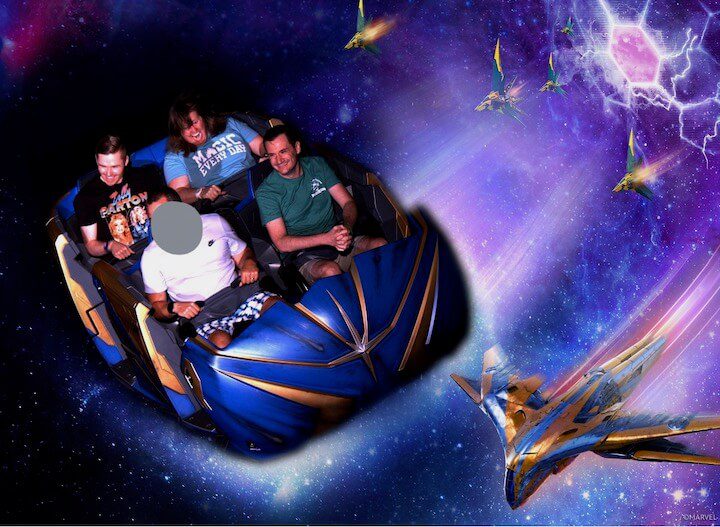 I believe THIS backward launch might have been my big issue.  I was not mentally prepared for this and I was disoriented because of it.  It is dark with lots of lights and screens and visually impressive, but I couldn’t focus.  The track is VERY smooth, so no bumps at all, but it’s very FLUID – so you rotate a bit as you move through, almost like you’re swinging.

I don’t think I caught my breath after the initial launch.  I screamed like a schoolgirl the ENTIRE ride.  I was calling for my Mum and Dad and anyone else who could come save me…. my throat was sore for 3 days after!

We got off the ride and I could tell the Alek and Curtis were both concerned about me, but I was ok.  My legs were a little wobbly, which is why I think it’s a bit crazy they have STAIRS at the end! 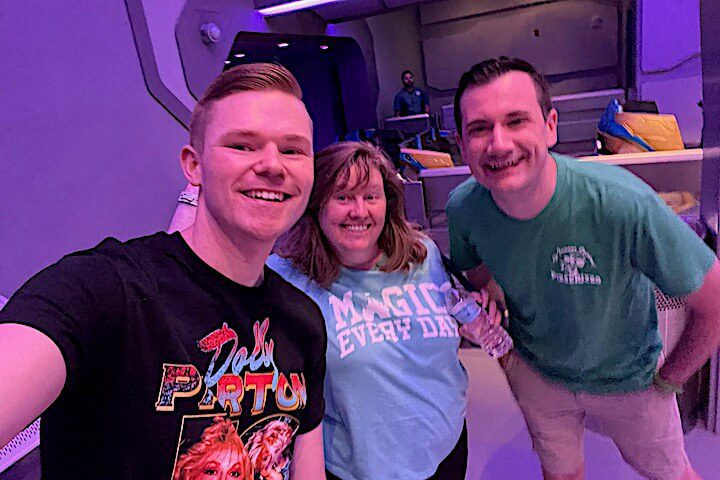 Right after the ride – I did ok, and I’m smiling (mostly because it’s over!)

But… I was ok.  We got outside and did some photopass shots. 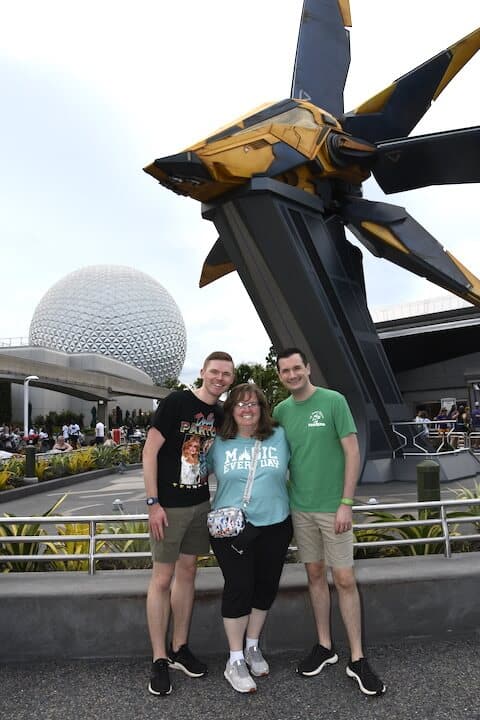 I wasn’t SICK – and after about 5 minutes I felt pretty normal.  In fact we went for dinner where I had a burger and fries and this lovely treat!  I highly recommend the waffle at Creations. 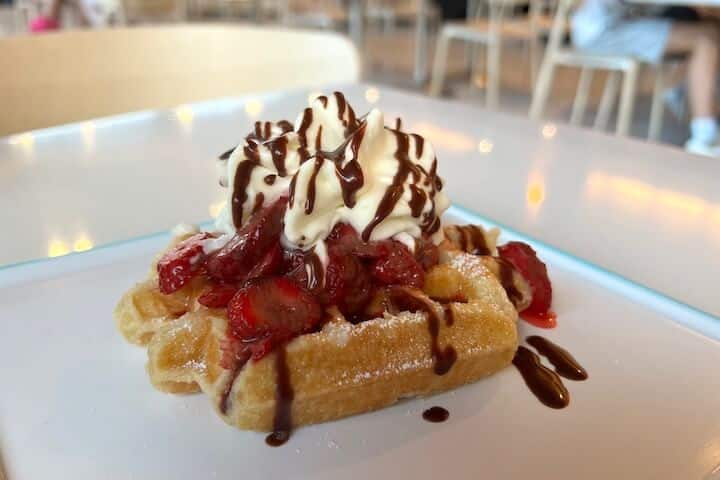 This waffle at Creations was so yummy! And I deserved a treat

Would I ride it again?  I don’t know.  I’ve watched some videos now that I’m home and I know now how it all works.  I still don’t think I want to try it again.  I’ve done it once… do I really need to do it again?  Carrie and I talked about it on the podcast because she had a very different experience than I did.

Maybe I’ll just leave this attraction for the young ones, and I’ll get a waffle and wait for them there.  It didn’t make me feel yucky like Star Tours does, but it’s a “thrill” that I probably don’t need.

If you want to hear about Carrie’s initial experience you can listen to it on episode 148 of the podcast where she does NOT mention it goes backwards! 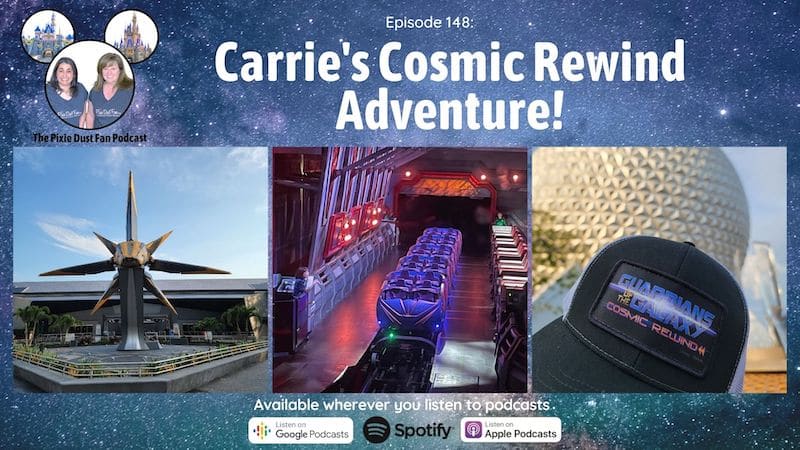 Have you experienced Guardians of the Galaxy: Cosmic Rewind?  Were you sick or did you love it?  Let us know in the comments below!

The perfect cure for the dizziness: Beverly, right around the corner at Club Cool!

LOL – I might have to disagree, I really would have tossed my cookies if I drank that after! 😉

I knew everything I could about the ride but was still shocked. I was totally disoriented and could not wait for it to end. When we got off the ride I said to my hubby that I almost wet my pants one & done for me! I am def too old!

At least you tried it, and now you can confidently say “never again” 🙂

Was there last week. My daughter and zi rode it twice! LOVED, LOVED, LOVED. I’m with you, screamed like crazy and lost my voice also.
You should see our pics! Lol

Amazing!! I’m glad you loved it – did you ride early in the day or later? I’m trying to figure out if that was my issue 😉

Both we had a noonish time and 7:45 pm time. Made sure not to eat anything after 7 am muffin till after the ride the early time. Did take dramine just in case.

Smart! I took the “Canadian version” of dramamine – but maybe I need to try the real stuff!

I rode the ride this past August and while I wasn’t sick it definitely took me almost an hour to recover. I most definitely did not feel well at all and had wobbly legs… and I said out loud… “they actually expect me to walk up and downstairs now?” I am definitely too old for this ride. It is a one and done for me

I totally get that! I felt the same about the stairs. At least you were able to try it and experience it… and you never have to do it again!

I had a bit of remaining nausea after having Covid 3 weeks before our trip. I was worried the rides at Disney and Universal would be too much on my now sensitive stomach. I was fine on everything. I avoided most spinning rides (I’m looking at you tea cups ). I loved Guardians and and zero nausea after. I loved how smooth and fast it was. The only ride that got me was Hagrids in Universal.

I get that about the tea cups – I haven’t been on those in years!
I am so glad to hear that you had zero nausea after, I have heard that about Hagrids – I’m not even sure if I’ll try that one!

It was our first ride of the day. I absolutely loved it and laughed like crazy. My mistake happened about 1/2 way through. I turned to look at my son to say I loved it. When I turned back around I was completely disoriented. I never made it back after that. I couldn’t get up off the ride and needed a minute, trying not to get sick. Once up I sat at the bench and they brought me water. (Prior to the steps) The next time you ride it, notice the line of trash cans they have, and the bench… Read more »

I can absolutely understand how turning around would do that to you – that’s how I basically felt the whole ride! Maybe that’s the trick? Don’t turn around 😉
I’m sorry to hear that you did end up getting sick – but I’d be curious to know if you try it again in the future how you feel. I hope that you can get back on this and it’s all ok for you!

We were at WDW a couple of weeks ago to celebrate my 50th Bday. I also didn’t know anything about the ride before I rode it…and was also very sick from Mission Space (back when there was only one option). However, I LOVED the GOG: Cosmic Rewind, and we did a second day at Epcot just so we could ride it again!!

Happy Belated birthday! I’m glad to hear you were ok with it – even without knowing about the start! You’re giving me hope that maybe I’ll try it again one day 🙂

I rode it last week………WOW! I’m on the “never again” team. Probably the only way I would do it again would be if a friend needed a ride buddy. DH had his eyes closed through the whole thing. He thought the easiest part was the backwards launch. I had to close my eyes for a few seconds after the moon because I was definitely getting dizzy at that point. I think it’s all of the little lights/stars that keep moving in your point of view. And honestly – the stairs on the way out?! What the heck.

I am with you – I think it is those little lights! And yes… glad it isn’t just me who wonders about the stairs!!