I was travelling to Disneyland with my mom and aunt, and since I was away for Mother’s day I thought I’d schedule a belated mother’s day date with afternoon tea at Steakhouse 55 at the Disneyland Hotel.  After I made the reservation, it was announced that the afternoon tea was going to be re-themed to a Pixar Fest tea for the duration of the summer.

When we arrived for our 12:25 pm reservation, only a few tables were seated so we were able to take a good look around the restaurant.

They have pictures of Walt Disney as you walk down the hallway to the restaurant and the booths around the restaurant all have large photos hanging above them of classic movie and music stars. 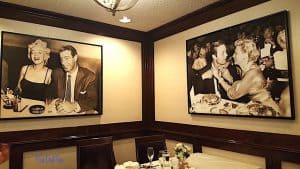 They had a subtle nod to Pixar Fest on each table to not take away from the beautiful décor.  Our table had a tiny Cars arrangement with succulents. Other tables had Finding Nemo, Up! and Toy Story centerpieces with flowers. 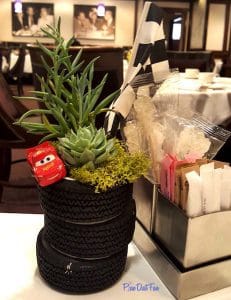 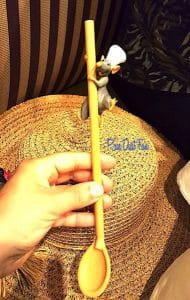 We didn’t expect such a large list of tea so that took a bit of deciding, but that was the only choice we had to make. I chose the Organic Lychee Green, my aunt picked Tangerine tea, and my mom decided to keep it traditional with an English Breakfast tea. We were each brought a teapot that held quite a bit of tea – about three cups.  We are not big alcoholic beverage drinkers so we sipped our sparkling wine leaving quite a bit left at the end of our tea.  It think we all felt the sparkling wine was quite tasty and we really enjoyed our tea choices too. 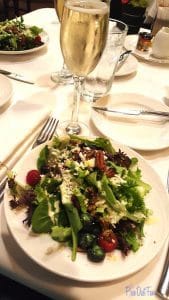 After our drinks were delivered our salads arrived. It was a large portion and thought the edible glitter on the berries was a fun touch.

The tea fare is served on a three tiered stand with the scones on the top level, then the savoury  canapes on tier two, followed by the sweet treats at the bottom. 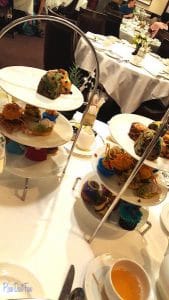 We really liked the scones, mostly because of the Devonshire cream, raspberry jam and lemon curd  that accompanied them. I had never eaten Devonshire cream before. Wow! The colourful scone was to represent the abstract thoughts from Inside Out. It had chocolate chips so we wondered why they chose such a sweet scone since there were so many desserts to enjoy. But it didn’t stop us from smothering the scones in jam and creams!

I think the three of us all enjoyed the savoury plate the most, with the winner being the Sweet Ginger Avocado Toast. The canapes were also themed to Pixar characters. The avocado toast was to represent the Little Green Men, the roasted vegetables was a ratatouille, the bright blue deviled egg was Dory, but the server noted most felt it looked like the Pixar ball, and the carrot cream cheese was Merida (with the crispy carrot strings as her hair). All were great flavours and combinations. This received two thumbs up from around our table. 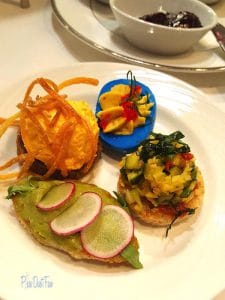 For the dessert plate our two favourites were the cheese cake and the dipped strawberry. The cheesecake was made to look like a quarter of a ring of cheese and if you look closely at the strawberry there was an image of Mr. Fredrickson’s house and all the little sprinkles were to be the balloons. The Up! inspired éclair had a jelly filling as did the Sully cupcake. We left a few of the desserts untouched.  They were good, but not a great as the savory plate (well except the cheese cake — it was great) 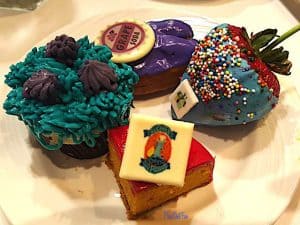 This was my first time going for tea so I do not really have any prior experience for comparison. I was glad that I had planned this special reservation to enjoy with my aunt and mom. I think it is great for a special occasion and now that I have been to tea, I may be interested to see how other Afternoon Tea’s fare!

The Pixar Fest tea takes place Fridays thru Sundays until September 2, 2018. Tea reservations can be booked between 12 noon and 3:00 p.m.

This review was written by travel agent Carrie Leblanc