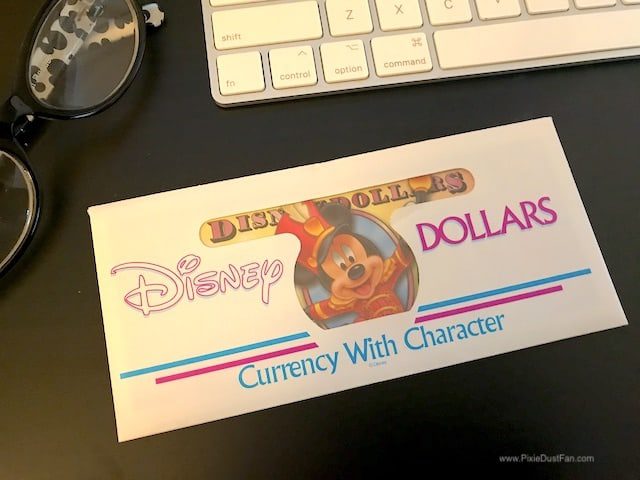 You’ve probably heard it said that Disney has a license to print money! Well, that’s true . . . not long ago they actually did print their own money!

Disney Dollars could be purchased in plenty of Disney locations and guests could spend them in a variety of ways!

Almost a decade ago I wrote a blog about Disney Dollars. I asked readers to imagine they were at the Happiest Place on Earth with a pocketful of cash!

What could be better? How about being at the Happiest Place on Earth and that pocketful of cash had pictures of your favorite Disney characters! 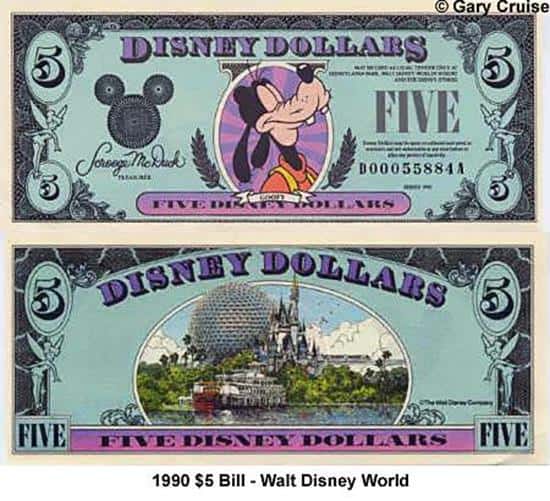 My wife Carol used to keep Disney Dollars on hand to use for special gifts . . . sometimes when friends or family were heading on a Disney vacation, their birthday or anniversary gift from us would include a small envelope stuffed with a few Disney Dollars. Everyone was always delighted with a gift of Disney Dollars. 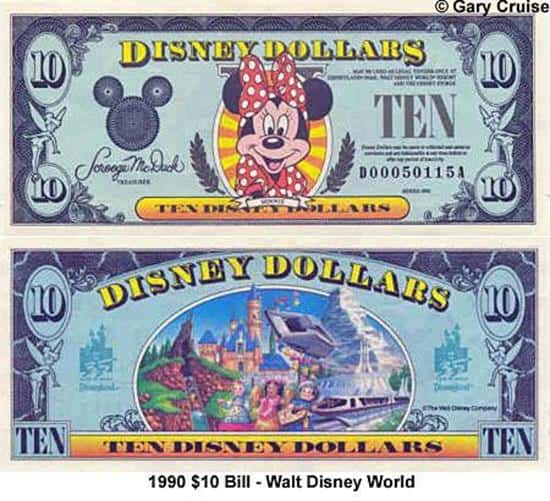 Alas, that all came to an end in 2016. The last Disney Dollars were sold on May 14, 2016. Those wonderful little sheets of spendable Pixie Dust were replaced by plastic gift cards . . . most Disney fans said “BAH HUMBUG”!

Can I still buy Disney Dollars?

Yes, but not from Disney. 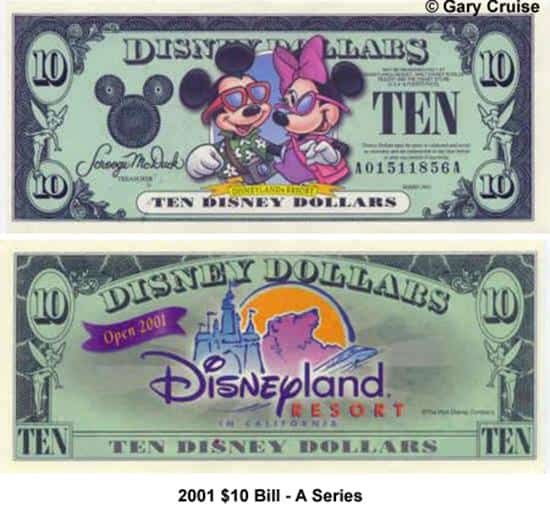 Disney Dollars used to be available at Guest Relations in all the Florida theme parks and water parks. At Disneyland they were available at one cashier location in The Emporium.

There is, however, an active market where Disneyana Collectors can buy old specimens. Check out a few online shopping sites, like e-Bay or Amazon to see how valuable Disney Dollars have become. 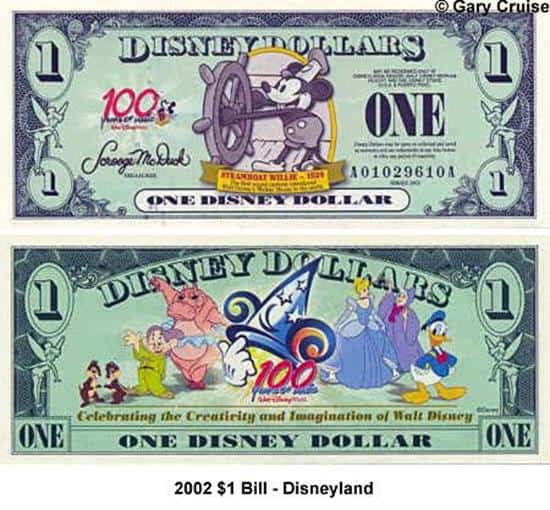 Can I still spend Disney Dollars?

The last I heard, Disney Dollars were still accepted at ticketing locations, food & beverage venues, merchandise locations, recreation areas, resort concierge desks, resort front desks and Guest Relations at all theme parks and water parks. Since they haven’t been in active circulation for several years I wouldn’t be at all surprised if you got a ‘deer-in-the-headlights’ look from some of the newer cast members when you present a Disney Dollar to pay for something.

I’m sure they are still accepted at Guest Services . . . but don’t forget, they are worth a lot more than ‘face value’ to collectors.

Let’s look back at the history of Disney Dollars. 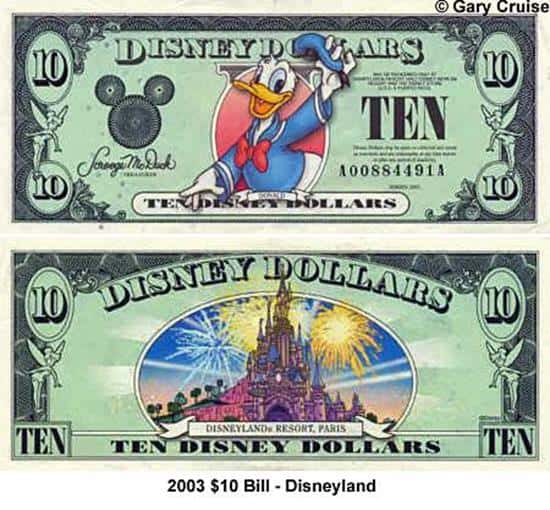 As I said earlier, they very desirable items for Disney memorabilia fans. Naturally Carol is an avid Disney collector so she has set aside a nice variety of Disney Dollars in her permanent collection. You can take a closer look at her collection here: http://www.carol-anne.ca/Disney Dollars.htm

Over the years some of the series featured specific themes such as park anniversaries or pirates and princesses. The Disney artists who designed the notes never missed a trick as they strove for the “cuteness factor”. 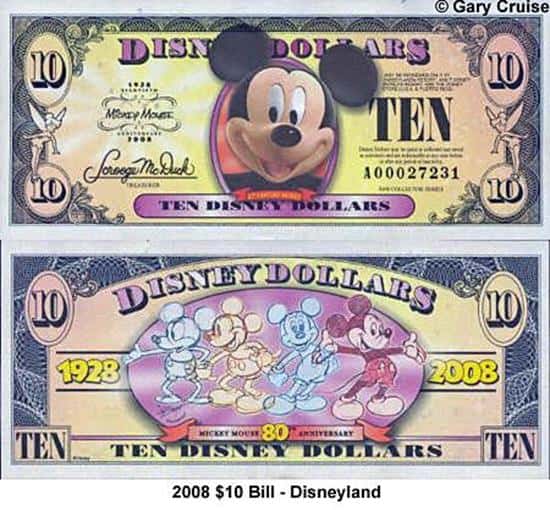 Disney Dollars were printed on high quality bank note paper and incorporated anti-counterfeiting features such as microprinting, and hard to scan/copy reflective ink with embossed imprinting on the front and back of the bill. In addition the bills were printed with serial numbers and letters which were unique to each bill. Disney Dollars created for Disneyland in Anaheim bore a serial number beginning with A and those created for Walt Disney World in Florida and The Disney Stores began with D and T respectively.

In 2005 only, Disneyland (A) and Walt Disney World (D) released $50 bills that were designed by Disney artist Charles Boyer for Disneyland’s 50th Anniversary Celebration. Mr. Boyer personally signed a number of these bills and a signed copy is a very valuable collectible indeed! 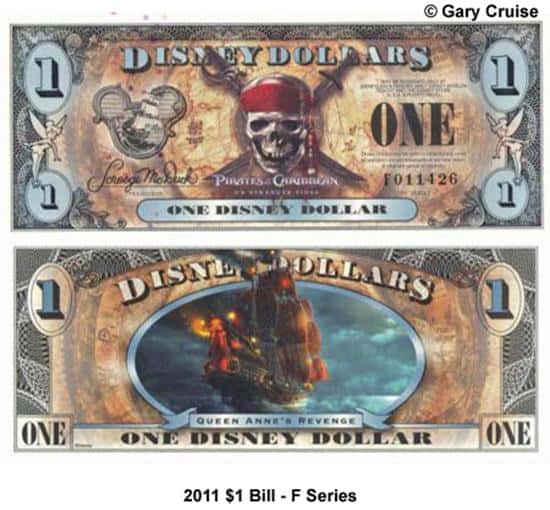 Disney Dollars have even been portrayed in cloisonné pin form for Disney Pin Collectors . . . and yes, Carol has quite a few of these too!

Disney fans everywhere were disappointed when Disney announced the end of this truly unique form of currency back in May 2016. These wonderful little bits of Disney magic were permanently replaced by dull plastic gift cards. 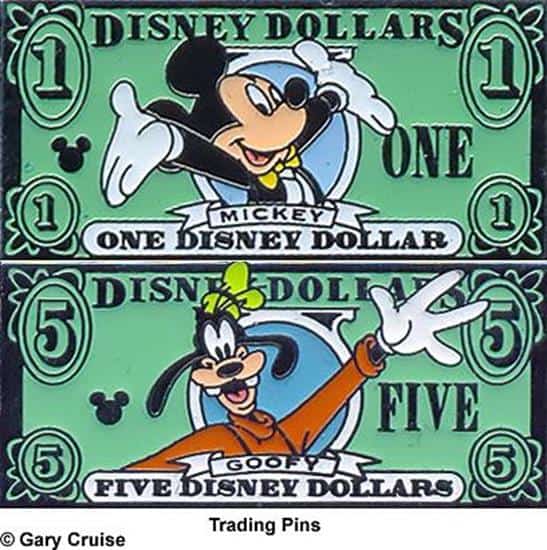 Of course, Disney are masters at marketing . . . and they’ve discovered that if gift cards are cute enough, they too can become collectible . . . so those dull plastic cards have brightened up a great deal over the past few years! 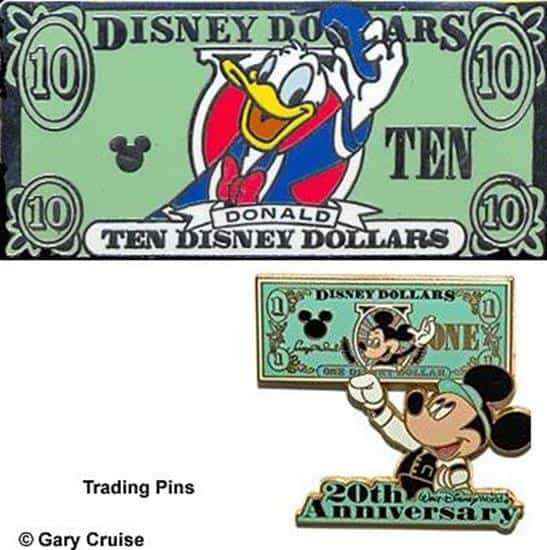 Do you have any Disney Dollars tucked away in your collection of Disney memorabilia?

If you do, be sure to take very good care of them because they’re quickly becoming irreplaceable! 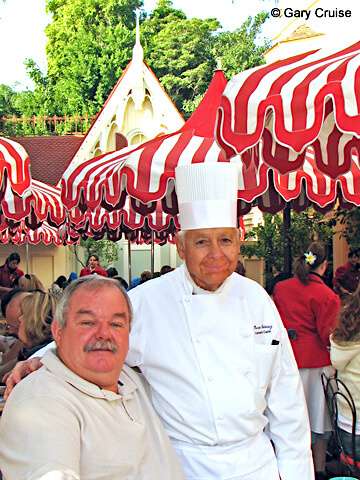 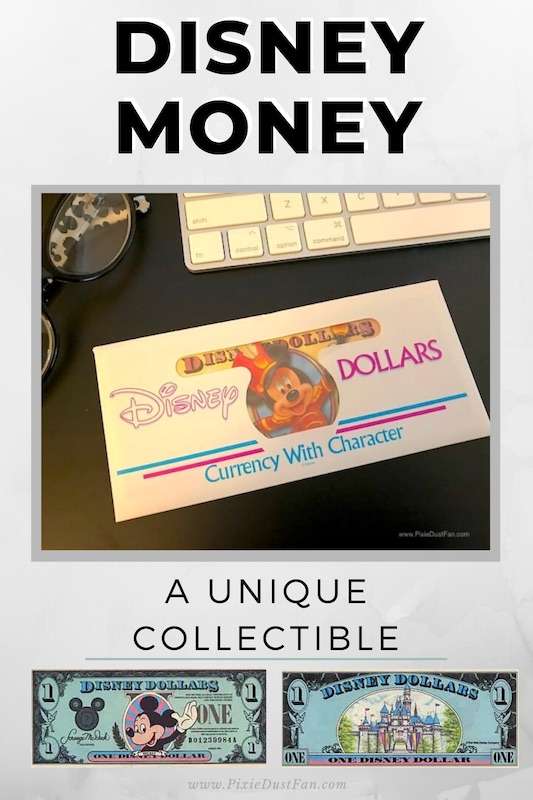 Hello! would Carol be interested in purchasing any disney dollars from me? I do have some 35th Anniversay $10 Minnies in my collection, as well as many $10 Simbas, $10 regular Minnies and $5 Goofy. have a couple of D series $10 Simbas as well. if she isn’t do you know of where I could sell them?? Thank you!!!

Hi there, I’m not sure if they are in the market to buy, but I will let them know about your comment.

I would think that there could be a market on Ebay to sell some to collectors.

I hope that helps and good luck!

Hi Christine – Turns out Carol is only missing one particular year so they said they would pass, but appreciate the offer!

Wow – that would be quite a collection! Where do you post them for sale Greg?

Hello Greg. I’m interested in your Disney Dollars and would love to buy some if I can afford it. Thanks. How can I contact you?

I’m looking to purchase disney dollars. I just started getting into it and now its become a hobby for me.

What a great hobby to get in to! What dollars do you have already?

I have some sets of Disney dollars for sell. If you want to email me at yackem@gmail.com

Hello I’m trying to sell it 65th anniversary 199e mickey mouse disney $1s if you are still interested in purchasing them I have two so please you can email me @ 3tkpaisleybrat84@gmail.com

I have four Disney dollars. They are Mickey mouse series 1988 and series 1997. I’m asking $50 dollars for all. I also have the Disney envelope .

I have two 1988 five dollar Disney notes and 2 1$dollar notes for sale. One of the one dollar notes is a repeater note. If you’re interested let me know.

hello there
do you know what series she’s looking for? I have 2002 series Snow White and tinker bell
we had two envelopes full but were stolen

Are the 1993 $1.00 Disney bucks worth anything? Recently going through some stuff of my Dad’s and found them. More for curiosity than selling.

I have 3 different Disney Dollar auctions going right now on ebay if anyone is interested.

Does anyone have a source that shows the production runs of each of the bills or were they all printed in the same amount? Curious if certain bills were printed in smaller numbers than others. Been searching for this info but haven’t been able to find anything. Thanks

Great question, but I don’t think I’d even know where to start to look for something like that?

Hi Everyone!
I have a family member who has collected Disney Dollars from 1988-2007. A LOT of rare and highly sought after ones, such as 2005 Chicken Little without a barcode, 2005 Stitch without barcode, 1997 Simba, to name a few. I am looking for a SERIOUS collector to purchase the entire lot. I can provide a detailed list and pictures. Thank you!

Hi Maureen, sorry for the long delay in reply. If you’d like to send me your email address, I can send you the list of all of the DD my family member has.

Hi Terry, sorry for the lengthy delay. I would be more than happy to send you a list of the ones my family member has if you’d like to send me your email address. Thanks!

**NOTE**
I suppose I could list them all here in a reply, but there are HUNDREDS. Admin. – please let me know what is best. Thanks so much!

Thanks Amy for checking! I would suggest you email them if there are hundreds 🙂

I have a question, were the dollars themselves distributed only in the year marked? I have a 2005 Stitch dollar that I thought I remembered getting but I don’t remember actually going to a Disney park in 2005. I may have but I thought it might be more likely (or possible anyway) that I visited a few years later. Just trying to satisfy my curiosity since apparently my memory is failing me.

I am interested in buying these .. if you could please text me with your price that would like to sell them for i would really appreciate it. Thank you
330-577-6525

I have 7 2003 10 Disney dollars. They have Donald on the front and Disney land Paris on the back for sale.

If anyone is interested uncirculated Disney Dollars collection. Email msjadenyc@gmail.com

Hello -Im wondering if you have ever come across Disney Dollars with print errors on the serial numbers? I have 2- 1987 $1 notes (second release referencing both Disneyland & Disneyworld) missing most of the 4th numerical digit in both serial numbers. These are consecutive bills in mint condition (not yet graded) as they are uncirculated having been stored in my album since 1987. Anyway I have yet to find anyone who has ever come across this error and was wondering if you, or anyone else, has? Thank you very much.

So interesting! But no, I have never seen that – that would make them pretty rare I think!

I have a two bill framed 2005 $50 Mickey.
One Facing the front side and the other the back side.
Two consecutive serial numbers D#
They originally came and still framed since it was given by Disney for our Company to be their number 1 ticket purchaser back then…
If you are interested, please contact me on edcardoso@mac.com