5 Reasons Why Merida Is The Princess Young Girls Should Know I must confess that I’m addicted to bad TV.  I watch the mindless reality shows for entertainment and a glimpse in to the lives they lead.  The important thing is that I’m in my late 40’s and I know the difference between ‘reality TV’ and ‘reality’.  How many young girls in their pre-teen years can see the difference?  Social media is a powerful tool, but for young girls everywhere it can be a window in to a world that is neither attainable nor healthy.

Watching the women in the media like the Kardashians left me thinking – what can young girls today watch to see empowered, independent and strong women?  Maybe it’s time to look throught your DVD collection and find your copy of Brave.

When Brave first came out in 2012 I was excited to see it.  Given that my parents immigrated to Canada from Scotland before I was born, I thought it would be cool to see a Scottish Disney princess.   While Disney movies always have ‘lessons’ in them – I didn’t expect that this one would have such a profound message to share with young women everywhere.

Here are 5 reasons I think Merida is a princess that young girls today should know about:

1.  She is talented and different

She can shoot, climb and ride with the best of them and can rival any man in a challenge.  She isn’t the typical princess and owns her individuality despite the pressure to conform.

Like all of us, Merida makes some hasty decisions that get her in to trouble.   Turning her mother in to a bear was kind of a big one!    The key was that Merida took responsibility for her mistake and cared for her mother while trying to fix it.  There was no quick fix, no hero to rescue her – she figured it out herself.

Faced with challenges, Merida does not give up.  Some may refer to it as being stubborn – but I think she shows us that if you believe strongly in something, you should never give up.  You may not have to face the likes of Mor’du – but a challenge is a challenge! 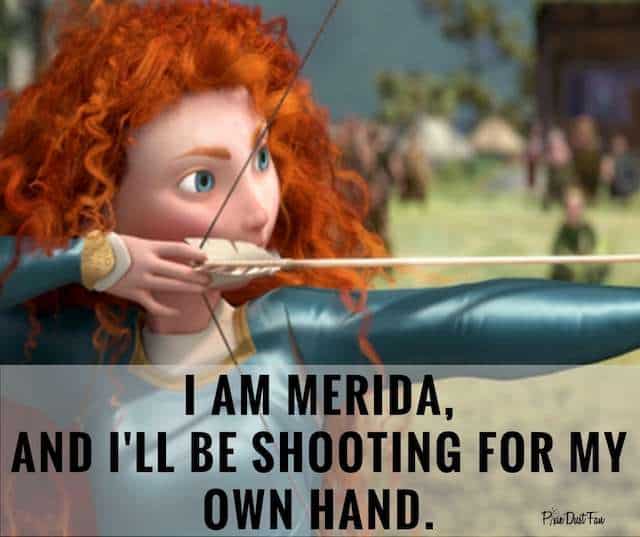 Merida Doesn’t Need A Prince, She’ll Be Shooting For Her Own Hand

Merida spends the entire plot teaching us why she is more than capable of running her kingdom without a man by her side. I’m not advocating against marriage or true love – but it’s important to teach young girls that they are complete without a prince charming.

Merida faced the challenge of deciding who she wanted to be.  She decided her own future when she ‘won her own hand’ in the archery challenge and proved that she was an individual with strength, determination and courage.  Who says a princess shouldn’t have a bow and arrow anyway?

The next time you settle in for a night of TV with your princess, consider sharing a story of true female empowerment.  Teach her that happiness, fulfillment and self-respect is worth more than growing up to have millions of twitter followers.

What princess do YOU think is a good role model?